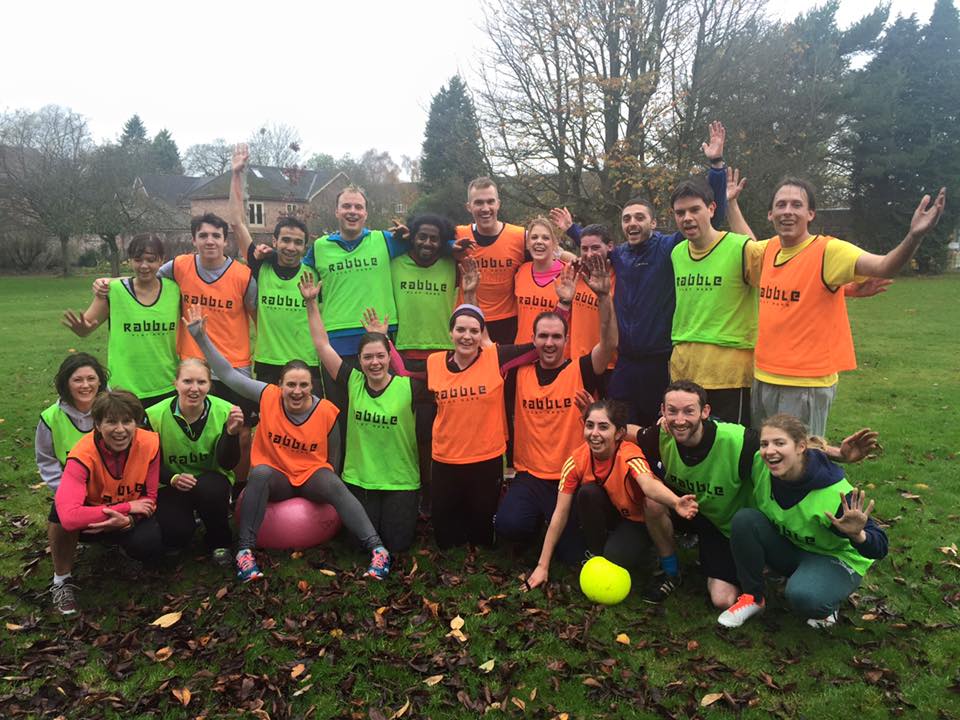 The Great North vs South 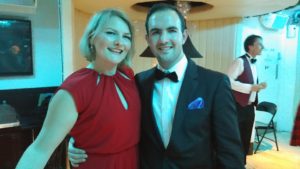 When I heard that Rabble was expanding to Manchester I knew I’d have to check it out. Planning to up when I had the time off to join a game, but at the sound of a London vs Manchester game, I super keen to go up in a group and challenge the locals. So we started to plan, sort of… (if you want to know ask Jade).

Waking up on Saturday morning was tough and after I got on the train I discovered that I’d forgotten my phone charger, annoying! But I caught up on sleep on the way up, making the most of my very cheap 1st class ticket! Not going to lie it is really comfy there! 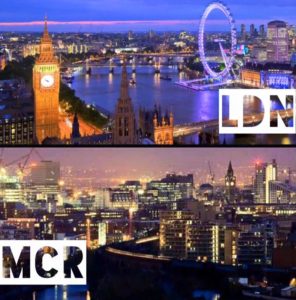 Arriving in Manchester, I realized it was much colder and wetter than I originally thought (to demonstrate more of my planning and packing skills!). Some more Rabblers (not in 1st class) were on the train behind, Emily, Deborah and Matthew Andrews (the unstoppable tank). On route to Didsbury, I was told that Matthew had been out til 6am the previous night, rushed home (to the depths of East London), got ready and caught the train, managing a whole hour of sleep (tank) on the way up.

Things did not seem to be in the London’s favour, many had failed to make the train, one ill, one had just sleep in! But on we went heads held high, ready for the best Manchester could throw at us. We made it to the park with about 10min to spare! Waiting for us was a rather large group of people, Layla was running late (typical) and Jared was lost (….Aussie) and a few new players I didn’t know.

The warm up gave us a chance to check out the Manchester players, they had some very fast and agile player and they all worked very well as a team. Then our late re-enforcements arrived. 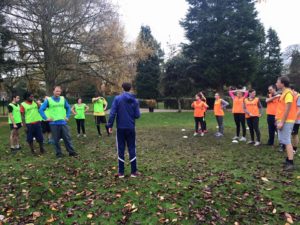 First up was dodgeball (YAY)! I have never played such an intense game with both teams were giving it their all! Both teams pulled out amazing performances, racking up to more than 5min in the middle, with three balls in play! Everyone sprinting after taking a hit, their sole focus was to get back into play as fast as possible. There were amazing catches and throws by both teams, maybe some throws were slightly high.. (Layla).

The first round went to Manchester, constant pressure and awesome jumping had led them to a well-earned first win. But not to be discouraged London fought back hard in the second round and managed to pull off and incredible near 6min survival time. Manchester tried hard but just couldn’t quite hang on, and London took the second round.

Next up was the president, which involves three bases. The closest base to the attacking team was worth 1 point, the next was 2 and the furthest was 3 points. London attacked first and showed their experience using advanced game tactics; running around the Manchester defenders luring them to one base, when they moved to defend it, we’d storm another. Scores were high and it was a daunting challenge for the Manchester side to overcome. London’s attack was good but it was their defence that really shone, letting Manchester take bases one and two while heavily defending base three, preventing Manchester from getting the high points needed to catch up, leaving London leading after the first round. 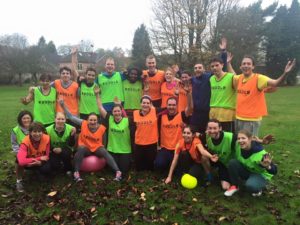 In the second round, Manchester learned and applied the London tactics faster than any team I have ever played with or against. In defence, they prevented us from taking three points and in attack, they broke our defence completely at one point and taking the game back to a tie.

In the final game, each team chose a president. Each team could attack until the president was eliminated by the other team. I was chosen as the first president for London, with Matthew as my decoy. On go, Matthew ran off into the distance to attract attention and I hid amongst the rest of the team, attacking bases to collect the points. Matthew’s decoy, was effective in tiring out the Manchester players and exposing bases. Unfortunately, Manchester’s defence strategy was strong, they had each chosen a player to eliminate, so could quickly work out who was the president. To my shame, I didn’t survive very long, ending up being hit by a random ball.

As Manchester huddled in to choose their president, we discussed how we could use their tactics and who each of us should mark. One of our girls had been watching the Manchester teams discussion (cheating) and had noted they were pointing and talking to one person, so we made an educated guess at their president. On go, it seemed we were right as this person took off in to the park and I ran straight after him. As it turned out he was much faster than me and I had to call for my team mates to help me chase him down. We lost him for a short time as he hid behind a tree but one of the girls snuck up on him and tagged him out. The damage had been done though and Manchester had grabbed a lot of points, making it very challenging for us to catch up. 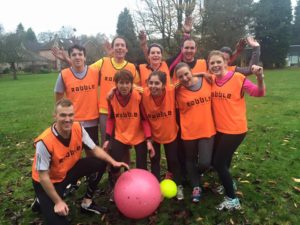 The game was changed for a final time, in the last three minutes every time the president was tagged you swapped sides and started your attack immediately in the remaining time. The team with the most points at the end of three minutes would win the whole match. This was a very fast paced game and quite hard to keep an eye on what was happening. All I really remember was we were losing by a fair amount until we made the great decision to make Layla, our smallest most unassuming team member the president. This worked out really well for us, Manchester had no idea who it was and with more than three of our fastest players acting as decoys we were able to rack up a huge amount of points. Layla cunningly ran from the starting base to the one point base, staying under the radar. Eventually by elimination they worked it out but by that point we had retaken the lead, with only 20sec left on the clock. We didn’t worry about who their president was and we just defended the bases just to keep their scoring low in the last seconds. After the counting up, Kieran announced that London had kept the lead, winning the final game and taking the final point to win the first Great North vs South (Yay!!).

In typical rabble fashion, it was post game pub time. We had a few drinks, some food, discussed the match highlights and got to know the Mancunians. Deborah almost missed her train to London, incomprehensibly not staying for the night out (in New Zealand we call these people pikers)! 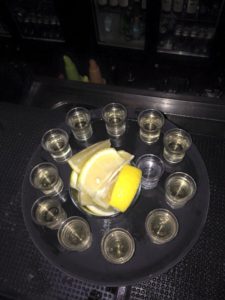 It was raining, I was glad we were staying inside. After struggling to find the table as Kieran didn’t reserve it under “Kieran” and he was late… very late but when he did arrive, ordered a round of tequila, that set the pace for the rest of the night. After we had all had our fill of food it was time to hit the dance floor and in true rabble fashion we took it over. It was amazing to see some of the quieter Manchester Rabblers become the life of the club, all shyness cast aside as they tore up the dance floor.

At some point, we braved the rain to find a bar where Matthew drank what could only have been a blended smurf. After this feat, we headed back into the rain, when a bouncer stopped me to say I was the only gentleman he’d seen in 12 hrs. Confused, travelling with 10 other blokes, I’d thought nothing of holding an umbrella over the lady next to me – she was no lady on the field! Out of the rain, the first thing we did was get in another round of tequila. Then back into the rain for some reason but the new place meant more shots (I love tequila!!!). If anyone stopped dancing, a finger would appear on top of their head and they’d have to spin until the finger was removed, stopping only when another round of shots was brought over. Matthew as always being relied upon to escalate the drinking (buying double rounds) and mess with our heads (buying tequila, Sambuca and water). 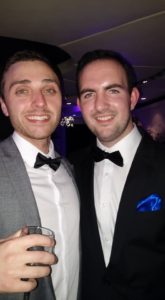 Matthew is evil. At about 2am, my night was ended by my phone not having the battery to get me home, after taking so many pictures. I said my goodbyes to everyone and found Kieran buying another round. I have no idea how they kept partying – including Matthew (unstoppable tank). I made it back to my hotel and I just crashed.

I was woken up by the hotel staff knocking on my door to say I had 15min to leave. I had to use signs to find my way to the train station (how did people live before smart phone?!?!) but I made my train and I spent the whole journey thinking about what a great time I’d had and looking forward to seeing them all again in London, when it is our turn to host the next Great North Vs South!

Thanks so much to everyone for organising such and amazing trip and to Manchester for making us feel so welcome!

My biggest regret of the trip was definitely forgetting my phone charger.